Ok so the Pocophone F1 ( Poco F1 ) was released on 22 Aug 2018. And it was a flagship killer at affordable price with snapdragon 845 chipset , and its been 2 years but none of the smartphone even compete with the Poco F1 in gaming , wait i am telling why ?
So, the PocoPhone F1 have Snapdragon 845 chipset which is the flagship chipset of 2018. And even now in 2020 it is performing very well in term of performance and speed, well talking about me i am using the Pocophone F1 from alst one year and i haven’t face any issue regarding its performance and gaming. 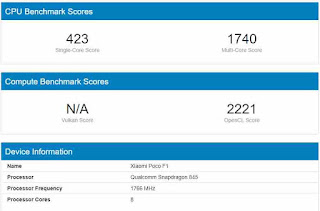 Source : Geekbench
The Geekbench benchmark scores are still a lot more than its comptetor like the redmi note 8 pro and some realme phones. Overall Single Core performance is somewhat less in the Poco F1 but thats not a problem.

How Poco F1 performs in Pubg ?

Poco F1 may be the best phone for Pubg or any other high end games. I have already compare the performance of the snapdragon 845 and some other processors that comes at the price of 20,000 – 21,000 Rupees , and the Snapdragon 845 is still a head in the top.

Here is the score between Snapdragon 765g and snapdragon 845 Chipsets

Thats all the numbers showing the performance of the snapdragon 845 in Poco F1. And here the Poco F1 clearly wins with a huge margin.

My experience of Poco F1 for playing Pubg Mobile :

Now Here i am only talking about all of my 1 year experience of playing pubg on Pocophone F1, and here i clearly want to say that if I have to pick a phone under 20,000 for Pubg , then i will definetely go with the Poco F1. I have also played Pubg on the Redmi Note 8 Pro and some realme phone under taht come with the same price and I can clearly say that the Poco f1 is much better in performance and for playing Pubg Mobile. There are several phones that comes under 20,000 price range and they have good processors too, but here no one can compete with the beast Poco F1 with Snapdragon 845. I have also pubg this phone to play pubg and when I bought it I have the option to purchase the redmi note 8 pro bit i go with the Poco F1 because the performance here is much better than the note 8 pro or any other phone under 20,000 like some Realme Phones.
My experience in detail –

Yes you can buy the Poco F1 Under 20,000 rupees if you want a phone specially for gaming or to play Pubg on it. If i have a choice to buy a phone for Pubg then i will go with the Poco F1 under 20,000 price bracket .

2 ) Graphics and performance of Poco F1 in Pubg mobile –

I say it awesome when comparing with other phones available in this price range, because the game run smooth and it constantly giving near about 57-60 fps mostly of the time even when in front of the enemies or while driving the vehicals or while smokes around or any other intense situations, but i some time drops to 50-55 fps but it get fixed within 2-3 seconds and returned to 55-60 fps again. But sometime it also drops to 30-40 fps and thats to rare, it rarely drops to 30-40 fps and get fixed soon.

One of the major issue that you can face while playing Pubg on Poco F1( Pocophone F1) is the touch delay. Yes there is a problem in the touch of the poco f1 I can’t say its a software level or hardware level problem but it exists and it is quite iritating. This may ruin you gameplay in some conditions. but the touch delay is too rare and you can feeel it all the time, you may feel for 2-3 time in 10 days approx. But the touch delay is not a permanent issue it get fixed within a few seconds and after that you can enjoy your game without any trouble.

Many of the reviewers says that the Poco F1 have touch issue, I have’t faced any such issue in my 1 year experince so far.

You can record gameplays of Pubg mobile or any other games without any major problem. One thing that i wants to mention is that you can’t record the gameplay in full HD (1080p) quality because thats make the phone lagging and it is quite not playable you can play the game even with recording the game play at Full HD , but the game feels too laggy and you get a frame rate of anout 40-50 fps. While in recoding at 720p (HD) quality the game is smooth to play and the recoding is also smoother and you can record at 60 fps constant and there is no major lag problem. The Bitarte should be at 10 or 8 mbps, which provide you a good quality of video playback. While recording at HD(720p) there is a minor frame drops like 55-58.
Conclusion – The overall package of Poco F1 ( based on my personal experience ) is good for gaming and Pubg, You can preffer it without any sacrifies cinsidering the other phone at the same price range. The Poco F1 provides you much better performance than other smartphone at the same price.
Thanks you.

How to Hide Career Result in Pubg Mobile-Bgmi

How to Enable Peek in Pubg Mobile-Bgmi