How to Use Emote in Pubg New State

Emotes in a game is made for entertainment and to tease a player in a good mean or to convey your thoughts depends on the emote type. Pubg New State also has several emotes and is continually adding more day by day. Here is the guide for the new players to use emote in the Pubg new State while in matches and in the lobby.

What is Emote in Pubg New State

Emote is prebuilt actions in the game that can be used for entertainment purposes or to convey a message to the teammate or enemies. Players can use the get various emote available in Pubg New State and use them while in the lobby area or in the matches with their teammates or alone as well.

How to use Emote in Pubg New State

The player can use the emote in the game while being in the lobby with friends or alone by tapping on the emote button on the left side.

Emotes can also be used and played while the player is in the match by tapping and holding the emote button and scrolling it left-right-up-down to move and select the emote to use. 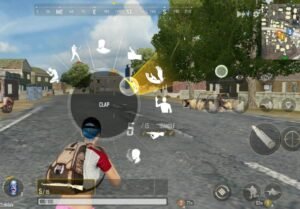 Go to the settings, and click on the “controls” option there.

Now from there select the layout that you are using and tap on the emote button, and increase its size or change its opacity. To change its position move it around the screen.

How to Get Chicken Medals in Pubg New State (Free)

How to Open Crates in Pubg New State For Free